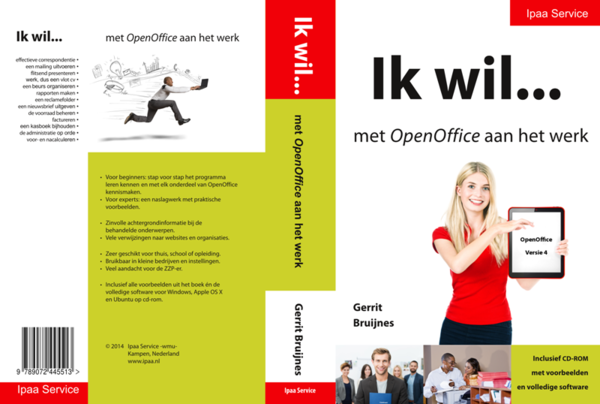 After producing a book on ‘how to produce and publish your own book using Scribus’ [1], I had taken up the task of writing a book on OpenOffice 4.x. Due to some complaining German speaking guys at a Linux ralley somewhere in the Netherlands, this title was quickly edited to serve LibreOffice 4.x users as well.
So now we have two titles on sale in the Dutch language:

Soon there will be a next new title dealing with the advanced use of formulas & functions in Calc,
which is used both in OpenOffice and LibreOffice. And there’s more to come!
Of course the layout will be done in Scribus version 1.4.4.

Here [2] you can find the cover, originally designed in InDesign 🙂 by Hans Hollestelle [3] from Kampen
in The Netherlands. The design was then rebuilt using Scribus.
(Some people still have to be persuaded into using OpenSource…)

I find Scribus 1.4.4 a fine program to use in OpenSource publishing in combination with one of the major
Dutch Printing On Demand firms, Scanlaser [4], beit that the interface could do with some improvements.
Eagerly awaiting version 1.5 because a little bird has whistled some promises regarding the interface…

Thanks to our Sponsors and Partners: